MPEB appearance at Oireachtas' Joint Committee on Education and Skills 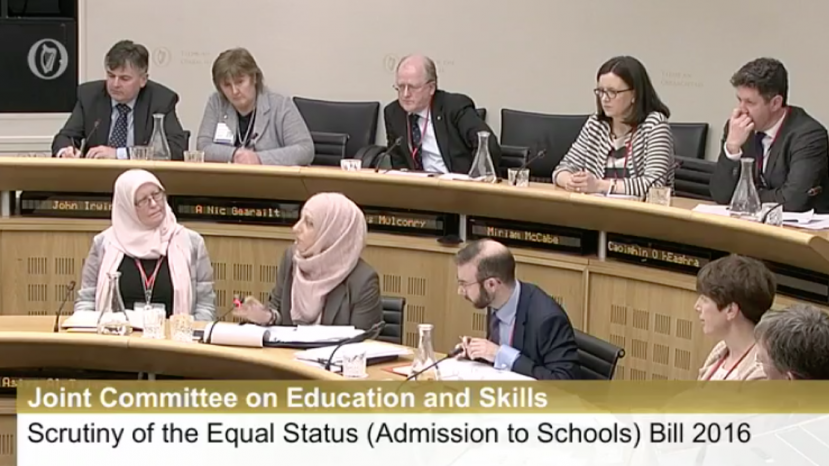 The MPEB was invited to attend the Oireachtas hearing on Equal Status (Admission to Schools) Bill 2016 on Tuesday, 7th February 2017.

Below is the highlight of the statement while the full document is available for download here.

The Muslim Primary Education Board is a voluntary body, representing Muslim Primary Schools in Dublin but also speaks on behalf of the thousand of Muslim children attending schools throughout Ireland.

According to the 2011 Census, there were almost 50,000 Muslims living in Ireland including over 8,000 primary school-aged children and 3,500 in secondary schools. The vast majority of these children attend schools locally but over recent years, parents have found it increasingly difficult to obtain school places for their children particularly in the secondary sector.

The current estimate of the Irish Muslim population is approximately 65,000, an increase of almost 30% from 2011 and it is an indicator that the numbers of Muslim children entering the Irish school system is increasing.

Parents have encountered a number of problems at the point of admission into schools and they can be summarised as follows:

The requirement for a baptismal certificate - Anecdotal evidence indicates that many non-practicing Catholic parents, people of no faith as well as Muslim parents face the same obstacle. Where other parents can, if they wish, obtain a baptismal certificate, this is not an option for Muslims. From the outset, this places an obstacle for the Muslim community.

Current admission policy is ignoring local catchment area in preference to admitting children of a particular faith. Under the present system schools have refused children from feeder schools, siblings who have established links with the schools and children from local catchment areas, citing school admissions policies that prioritise children of one faith over another. The situation at present is that the majority of schools in Ireland have a Catholic ethos, leaving Muslim children at the mercy of these admission policies and are seriously curtailing parental and students’ choice.

Many Muslim parents, especially those of newer communities are unfamiliar with the Irish education system, causing additional barriers in understanding varied and unclear admission policies.

The implications of the current policy and situation are as follows:

The Minister’s recent proposal contains some elements that MPEB would support, based on a more equitable admission policy respecting both religious faith and equality.

Therefore the MPEB would support the following:

Finally, the MPEB would also like to clearly state that both parents and students should have a choice with regard to religious and non-religious education and that removal of religious ethos from the schools, as a blanket policy is not a strategy that we would support.

We firmly believe that the way forward in education should be in seeking a balance between both ethos and diversity. A school community should reflect the wider society, both in its pupil cohort and its staff.