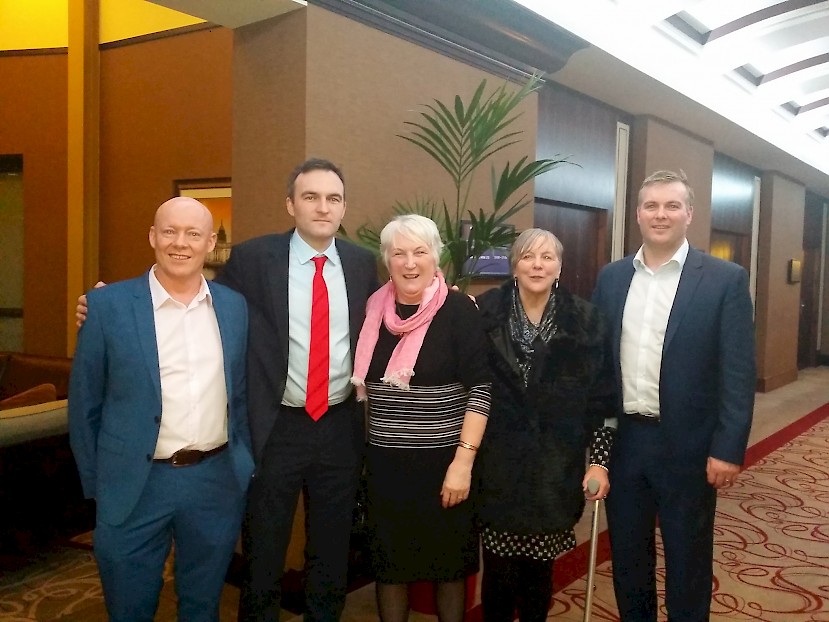 After dedicating over 24 years of her life, in serving education needs of the Muslim children in Ireland, the staff of the Clonskeagh Muslim National School and representatives of the Muslim community bid a heartfelt farewell to the retiring principal Mrs Brennan.

In a typically Islamic fashion, and in front of a packed banquet hall at the Hilton Hotel in Dublin, the evening was opened by a recitation from the holy Qur'an.

The acting Principal of the MNS, Mr Sean McCarthy welcomed the guests, setting an emotional and sincere tone of the night of appreciation for the past work of Mrs Brennan. In narrating his very personal experiences in working with Mrs Brennan, he particularly highlighted her tireless work in setting up high standards within the school, not only in education but in the discipline too.

The very popular school choir, performing in various languages, from English, Arabic, Irish and even Spanish, was yet another of Mrs. Brennan's projects which she wholeheartedly nurtured and supported, being very dear to her heart.

Amongst other speakers were Imam Yahya Al-Hussein, of the Islamic Foundation of Ireland, as the Patron body of the school, who joined in with long list of praises, Mr. Ihab, head of the religious teachers in the school, as well as Mrs Asiya Al-Tawash, the Chairperson the MPEB, who too gave her own personal portrayal of Mrs. Brennan's achievements going back to the founding years.

Accompanied by her two sons and in the presence of her sister and her closest friends as well as all invitees of the evening, Mrs Brennan, gave a very moving, personal account, remembering some of her own personal highpoints of her past 24 years of working in the school. She made a particular point in urging the staff of the school to continue to foster the Islamic values and ethos of the school, which are reflected not only in the religion classes but in all other activities of the school.

The evening was concluded with gift presentations from numerous organisations and individuals, attempting in a small way to show a huge gratitude and appreciation of the entire community for such an amazing educator and leader.

For more videos from the night, please visit the MPEB YouTube channel